A goal in the final minute of normal-time from 18 year-old substitute Josh Millo finally secured a win for Swans in a thrilling local derby. Another bumper crowd at The Sports Hub witnessed an end to end encounter that saw both sides have numerous opportunities to win the points The visitors looked to have done that as they took the lead for the first time after 68 minutes, but Swans quickly hit back before going on to grab that last minute winner. Over the years, excluding a successful penalty shoot-out, that leaves the Curfews with just one win on Swans’ territory in 14 attempts.

Swans were looking to bounce back following two cup defeats in which they had failed to score, and they were glad to welcome back Charlie Nicholas, Joe Hicks and Harry Mills, who all missed the FA Trophy exit at Uxbridge. Ollie Twum also came in for a deserved start.

Chertsey had the ball in the net with just a minute played when it was nodded into the box following a good move down the right and Jake Baxter lobbed it over goalkeeper Liam Allen, but the former Swan was clearly offside. The visitors continued to look the more settled in the opening few minutes, driving a shot over after getting in on the right.

But it was Swans who went close to opening the score with five minutes played. Mills played a fine long ball down the right to find Max Blackmore, and he got into the box past Kieran Murphy to be left with a one-on-one with Nicky Jupp, but the Chertsey keeper made a good block at his near-post. Swans went close again five minutes later when Hicks played a terrific diagonal long ball from deep on the right to pick out the run of Jordan Adeyemi on the left. Adeyemi stepped inside Rowan Smith in the left of the box to drive in a low shot that Jupp kept out with a fine save at the near-post.

But Swans took the lead after 11 minutes. Taurean Roberts robbed Sam Hurrell just outside the box, and was immediately brought down by a lunging tackle from Darryl Harrison, that surprisingly did not earn The Curfews’ No. 6 at least a yellow card. The visitors were punished however as Mills curved the free-kick superbly round the right of the wall and into the bottom corner.

Swans went close to making it 2-0 with just over a quarter of an hour played. Nicholas played a fine long ball from deep on the left to pick out the run of Adeyemi, who brought it down superbly. Adeyemi was closed out by Harrison and Smith, but then showed great determination to win the ball back from Sam Murphy before slipping it through to Blackmore in the left of the box, but again Jupp came to his side’s rescue, making a fine block from the Swans’ striker’s left foot shot. Blackmore immediately had another chance when Alex Kelly played Twum down the right to play the ball low into the box, but the striker could not bring it under control.

Chertsey won a corner on the left, and Roberts was able to clear when a shot came in, but the Swans’ midfielder was soon in the thick of the action again. Allen attempted to play the ball out to him, but Scott Day nipped in to find Billy Montegue. Montegue got forward to drive in a shot, but Roberts did well to get a foot in, and the ball deflected wide for a corner on the left. More slack play at the back by Swans opened up a clear chance for Chertsey, but a terrific saving tackle by Kelly snuffed out the threat.

Jupp was again forced into action at the other end following more clever play by Adeyemi on the left. He almost got Blackmore in at the near-post, but the keeper was again able to block the ball away for a corner. Following John Gilbert’s kick, Hicks got possession on the right, and he combined with Adeyemi, who crossed into the box, but the ball was headed clear.

A spell of Chertsey pressure led to them equalising after 25 minutes. A corner was won on the right, and when the kick was swung in the ball went over Allen, and Twum headed it off the goal-line, with claims it had gone in. Mason Welch-Turner was immediately putting Bryan Taylor clear on the left, and his cross was tipped away from under his crossbar by Allen. Chertsey kept possession on the right, and Baxter got in a shot from inside the 6 yard-box that brought another fine save from Allen, the ball going out for another corner on the left. When the kick came in, Kieran Murphy was at the far-post to head the ball back across goal, and Day was at the other post to poke it over the line.

Dominic Ogun was shown a yellow card for a foul on Swans’ left touchline that looked extremely harsh in context, but the free-kick taken by Hurrell was headed clear. The visitors made a break on the left through Taylor, but his low cross was comfortably gathered by Allen.

With seven minutes of normal-time left of the half Swans almost regained the lead in sensational fashion. Chertsey’s Welch-Turner launched a long throw from close to the left corner flag into the box, and Hicks headed the ball away. Adeyemi collected it midway inside his own half, and he set off on a superb run down the middle that took him past several defenders and into the opposition box to be left with a one-on-one with Jupp, but a slight nudge in the back by Smith led to him shooting straight at the keeper. With half-time approaching Swans had another opportunity when Kelly played Blackmore clear into the box, but Jupp was again able to block.

It was the visitors however who went close to taking a lead into the break. Jupp sent a goal-kick down the pitch, and when the ball was allowed to bounce through to Baxter in the box, he hooked it against the crossbar. Ogun cleared the ball from the line and Allen punched it away.

There was still time for Mills to make a great run that took him into the Chertsey box, but he was closed out.

Swans soon built up a good move in the second-half that led to Twum crossing from the right, but he couldn’t find Adeyemi at the far-post.

Chertsey immediately had an opening, but Baxter’s shot from the right of the box was blocked by Nicholas.

Mills’ fine diagonal ball found Twum on the right, and he laid back to Kelly, but his cross dipped just wide of the far-post. Twum’s persistence by the right corner flag led to the ball coming back to Gilbert, but his shot from the corner of the box flew just over. Mills then played a fine through ball to Adeyemi in the left of the box, but his cross was blocked behind at the near-post. Gilbert’s corner from the left sent the ball dipping behind.

Midway through the second-half Millo came on for Twum, but he was immediately watching his side go behind. Curfews’ substitute Manolis Goganos took a throw from the right, and when Day headed the ball on to Montegue in the left of the box, he struck a fine half-volley that struck the underside of the bar, and the ball bounced down and just over the goal-line.

Swans were only behind for three minutes however. Nicholas sent an excellent ball from deep on the left to pick out Adeyemi just outside the box. Adeyemi chested the ball down, shrugged off the challenges of both Welch-Turner and Harrison, before rolling the ball low into the left corner.

Chertsey almost hit back immediately when Baxter found Trevan Robinson in space on the right, and he drove in a low shot that Allen went down to save.

Swans looked determined to find a winner however, and they forced two corners and a free-kick in the space of a minute. Mills found Adeyemi on the right, and he did well before playing Blackmore in on the byline, and his shot to the near-post was just palmed over by Jupp. A fine move led to Millo on the left setting up Gilbert, whose shot was deflected over.

At the other end it took a fine tackle by Ogun to prevent Robinson breaking through. Another break by Chertsey led to Baxter being found in space on the left, and his low ball across the 6 yard-box almost found Robinson at the far-post, but again it was Ogun who came to Swans’ rescue with a superb interception to deflect behind.

With normal-time running out Kelly was booked for a foul 40 yards out that gave Chertsey a free-kick opportunity. Sam Murphy sent the kick into the right of the 6 yard-box for Day to get in a header, but the ball went straight into Allen’s gloves.

That was a game changing moment, as Allen took stock before launching the ball down the pitch to find Adeyemi on the right touchline. Adeyemi did well to keep the ball in play, before getting past Sam Murphy and cutting inside. He then laid the ball across to Millo in the right of the box, and he swept it first-time, low into the far corner for his first goal for Swans.

As the match entered stoppage-time Chertsey put a header over at the near-post as a cross came in from the right.

Swans repeated the move that gave them their goal as Allen again sent a kick deep to find Adeyemi on the right touchline. This time he linked with Eddie Simon, before crossing into the box and just failing to find the head of Blackmore. The ball came to Millo in the left of the box, and he drove in a low shot that brought another fine save from Jupp down at his near-post.

With four minutes of added-time played Chertsey’s Robinson had a shot from the right blocked that led to unheeded claims for handball. The same player then ran on to Baxter’s through pass, and after being blocked off by Ogun, followed through on Allen, who had the ball in his grasp. The Chertsey substitute seemed fortunate to only be shown a yellow card.

The final whistle then blew to signal a fine win for Swans. 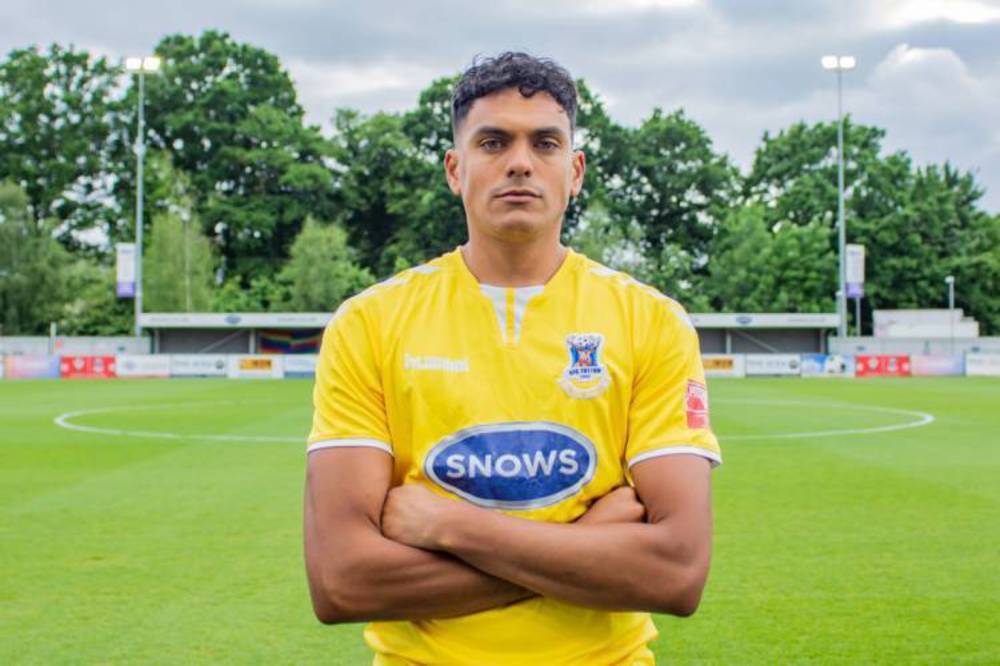